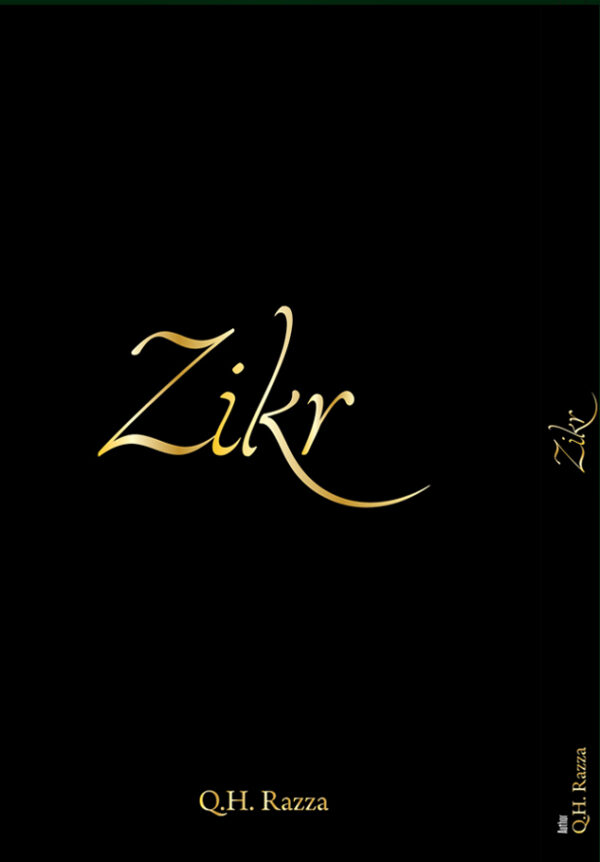 Zikr: A compendium on the Zikr of Allah – “The Illuminated Way of the Messenger of Allah ﷺ”

‘Zikr’, is the magnum opus of the world renowned Spiritual Master and Islamic research scholar, Mufti Qazi Hassan Razza. This work is a consequence of 35 years of practical and experiential knowledge, and could not have been produced without the enduring and tireless support of his beloved wife, Hafidha Noor-Ul-Huda Raza. In a time when people have become increasingly confused about spirituality in Islam, this work intends to clarify misconceptions around this core science, with an explanation of how it is the very essence of Islam, and how it differs from the other Islamic sciences in its practical and universal nature. The evidence for this is provided from the primary sources of religion; the Qur’an and authentic Hadith. In this work, Mufti Hassan provides a sound and wide base of evidence for the practice of zikr in all its forms; be it loud, silent, in isolation, or in a gathering. He goes on to discuss the physical sensations experienced by the people of spirituality, as found in the life of the Messenger of Allah (peace be upon him) and his Companions (Allah be pleased with them), as well as providing specific authentic evidences for Bay’ah (the pledge of allegiance) in the spiritual path, and the role of a spiritual teacher in transferring the light of Allah to the student. This immense yet concise work is an essential read for all, including students of spirituality; to enhance their understanding, and for those who are unsure of the path; so they can receive clear evidence from Allah and His Messenger (peace be upon him), and for those who wish to tread this most blessed path.

Regardless of where we are from, all of mankind has a yearning for something greater than themselves. This feeling is universal, and its fulfilment is in connecting with the Greatest Being. This divine remembrance is known as Zikr. The development of this connection has an established practical method. In this landmark work, Mufti Qazi Hassan Razza paints a clear picture of what this involves, with his source being the Holy Qur’an and the way of the Messenger of Allah; the Holy Prophet Muhammad ﷺ. Mufti Hassan is himself a master of this spiritual science, as well as being a world-renowned Islamic research scholar who has worked tirelessly to serve people across the world. His work includes the establishment of over sixty institutions of learning, a global charity network, a school, a business forum and a hospital, amongst many other things. “He has been there, seen it and done it and is completely qualified to show others how to do the same. Shaykh Ibn Ata’illah al-Iskandari says in his Hikam: “Do not keep company with anyone whose state does not inspire you and whose speech does not lead you to Allah.” It is patently obvious that Mufti Hassan is just such a companion, whose speech leads us to Allah.’ Shaykh Abdul Haqq Bewley

‘Mufti Qazi Hassan Razza has rendered a great service hitherto with this contribution to the literature on the mystical dimensions of Islam. Zikr is indeed the summum bonum of the practices of Islam as it helps with perfecting one’s moral and ethical conduct. We pray and hope that copies of this book find a place on the shelves of mosques and public libraries.” Dr Muhammad Iqbal

*It is our hope that you, the reader of this book, will not only reap the benefits inherent in divine remembrance, but that you will also benefit from association and fellowship of prophetic heirs themselves.’ Shaykh Naeem Abdul Wali

About Mufti Hassan: ‘Only a jeweller can recognise a jewel; others see it as a mere stone.’ Habib Kadhim As-Saqqaf

‘It is an honour for the Muslim Ummah to receive a new book on Zikr, which is not just written by a researcher, but by a real Zaakir. We have a book of Zikr to celebrate, but more important than the book is the author, a great man of Allah. The Prophet ﷺ mentioned that the Awliya are ‘those who remind you of Allah when you see them.’ And when we see Mufti Hassan, he reminds us of Allah. May Allah bless this book and allow people to benefit from it. Shaykh Muhammad Al-Yaqoubi

“Spirituality is not found in books: it is found by sitting at the feet of experienced teachers.” Q.H. Razza

There are no reviews yet.